The Canadian Native Fastball Association would like to honor Carey-Leigh Thomas of Six Nations, Ontario as Female Athlete of the Year. 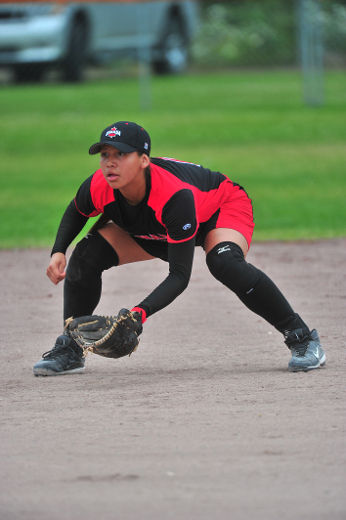 Carey-Leigh Thomas is living her dream.

After playing for Canada's junior fastball team, the Ohsweken resident has made the jump to the senior women's team.

Last week, Softball Canada announced that its roster for the 2012 U.S. World Cup of Softball VII in Oklahoma City, Okla., and Thomas' name was on the list. The event started Wednesday and continues to Monday.

“It means simply everything — everything that I have put into making this dream come true,” she said.

Thomas sees her success as the culmination of “all the sweat, tears, hard work, dedication and the will to prepare.”

She said that her achievement also means a lot to her community.

“It means opening up a door to indigenous people because if they can see that I can do it, then they most certainly can,” Thomas said.

“I am proud to be the first native to be named to Canada's roster. It means making a good name for my people, my community … and making them all proud.”

On Sunday, she made her senior women’s national team debut at the Title IX 40th anniversary celebration game against the United States.

Platooning third base with Port Dover's Megan Timpf, Thomas led off the top of the fifth inning with a single and advanced to third base.

“Oh baby, if I could only find the words to truly explain what I was feeling during that exact moment,” Thomas said of her debut.

“Everyone has their own heaven that they imagine …. That day, I was in my heaven,” she said.

“The way the crowd sounded and looked; the moment the head coach said I was going into the game; the moment when I stepped into the batter’s box; and fireworks went off when they announced my name.”

Thomas said she tried to soak it all in, especially when she was warming up on third base.

“I had took a second to soak it all in, to take a deep breathe and just simply look all around me, to smile and to say to myself, 'This is it, this is my chance to prove to everyone why I deserve to be on this team,'” she said.

“Everything that I did and accomplished in that game was for every single person who said I can't or I would never make it, because I just proved to those who discouraged me, or who did not believe in me, that I can and did make it.”

And she's trying to make every moment count.

“Every day I wake up with a smile on my face because it's a reminder of reality,” Thomas said.

“I don't have to dream about being here anymore because I made my dream a reality. Ever since I found out, I've been smiling non-stop because being a part of this team is everything that I have imagined. It has been such an amazing experience already and, in this program, there is no reason to not smile every day and every minute.”

The US World Cup of Softball VII features six national teams — Australia, Brazil, Canada, the Netherlands, Puerto Rico and the United States — competing in a single round robin.

Following that tournament, Team Canada will return to Surrey, B.C., where it will compete in the Canadian Open Fastpitch International Championship, July 4 to 9, followed by the ISF XIII Women’s World Championship in Whitehorse, Yukon, July 13 to 22.

GOOD LUCK CAREY-LEIGH, WE HOPE TO SEE YOU AT THE NATIVE CANADIANS ONE DAY!!!

CNFC TEAMS: Darren has played for a variety of teams at the Native Canadians including but not limited to: Garden River, Horse Lake Thunder, Sapotaweyak & Invermere A's.